Is the Dragon's Roar worse than its bite? Part I China's Nuclear Capabilities

Recently the media/news has been showing China's increased militarization. At the current rate of growth The People's Republic of China will become a powerful military adversary. But at the moment how powerful are China's armed forces?

Intro (video clip)
This video clip is from an excellent documentary about the development of nuclear weapons called Trinity and Beyond. This particular segment shows China's first nuclear test in 1964.

China possesses a myriad of nuclear missiles. However, most of these missiles are short range and theater range ballistic missiles. China fields 990-1070 SRBMs (short range ballistic missile). China's SRBMs such as the CCS-6 and CCS-7 have ranges of 300-600km and have low yield warheads. Most of these missiles are designed to hit targets across the Taiwan strait.

China also deploys around 300 of the more powerful IRBMs (intermediate range ballistic missile). These missiles can hit targets 1,700-3,000km away and pose a significant threat to U.S bases in Korea, Japan, Guam, and in the Pacific. China posses a large number of these missiles and continues to expand its IRBM missile programs. This reflects China's defense strategy. At the moment and for at least several years China will not have significant power projection capabilities hence its status as a Great Power not a Super Power like the United States. China is mainly interested in keeping foreign powers out of the area in a potential conflict over Taiwan. IRBMs would play a critical role in keeping regional control. The most alarming type of IRBM that is currently being developed by the PRC is the ASBM or anti-ship ballistic missiles from modified CCS-5 IRBMs. China is researching mobile retry vehicles (MRV) which would allow them to target U.S fleets within 1,700km of China. To counter U.S fleets would employ the Aegis missile defense systems from Ticonderoga class cruisers.

China has developed a few kinds of ICBMs that are capable of hitting the United States such as the DF-5. China owns 20 DF-5 missiles each are fitted with a single massive warhead with a yield of 4 to 5 megatons. The major problem with the DF-5 is because its liquid fueled its takes 30-60 minutes to prepare for launch while solid fuel rockets take less than 5. Additionally because accuracy of the missile is bad (can be off by 1km or 3,300ft) it has to be fitted with a single large warhead to compensate. This means that China can only hit a total of 20 targets with its entire stock pile of DF-5 missiles. China is also starting to field more advanced solid fuel ICBMs in limited numbers. The DF-31 and its upgraded variant the DF-31A are a significant improvement over the DF-5. It is unknown if the DF-31 will feature a single large warhead or multiple smaller reentry vehicles with greater accuracy. U.S Air Force Intelligence has determined that fewer than 15 DF-31s exist of each variant. The DF-31 is a silo based version of the JL-2 SLBM developed for the Type 94 SLBM submarines. The Type 94 submarine is China's latest SLBM submarine. A total of 5 are planed to be built and each Type 94 can fire 12 JL-2 missiles.

Compared with United States of America ICBM and SLBM force

China is expanding its territorial influence but in terms of power projection and targeting the continental United States specifically, The Peoples Republic of China is limited. It can only strike 100 targets in the continental U.S while America can hit 1,794 targets in China.

Is the Dragon's Roar worse than its Bite? A millitary evalutation of The People's Republic of China

This upcoming series of articles will assess China's current and future military strength in the fields of: Air Power, Naval Warfare, Land Warfare, Nuclear Systems, and Cyber Warfare. I am currently compiling information and the articles will appear shortly.
Posted by Matt at 11:47 PM No comments: 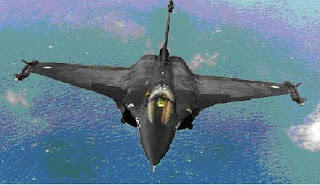 Related Reading:
The Future of 4th Generation Aircraft in the 21st Century 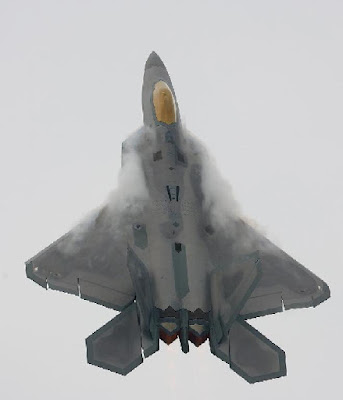 Recently the media has tried to convey the large sums of money "wasted" on the F-22A Raptor. Political cartoonists have shown the government throwing piles of money on the Raptor. Why? Well it turns out that the government has reason to do so.

The F-22A is the finest air superiority platform ever built. It has the smallest radar cross section of any fighter aircraft in the world (.0001-.0002m^2). It has supermaneuverability, internal weapon bays, AESA radar, F-119 engines capable of supercrusise at mach 1.8 and full after burner at mach 2.25, it is thermally shielded against heat seeking missiles, and will soon feature an H.M.D by 2011. In combat simulations Raptor pilots fight 5 or more F-15C's, the current air to air fighter of the USAF, on a regular basis. During the Red Flag training exercise the Raptors preformed brilliantly. There is no doubt that the raptor is the best air superiority fighter ever built. However, how practical is it to have F-22s?

Fighter aircraft have become more and more expensive throughout the decades. Back in Vietnam the F-4 Phantoms costed 2.4 million dollars. The F-15 which succeeded the Phantom costed 29 million dollars. And the raptor 1 million dollars. The main concern is even the U.S cannot afford to pay for 700 F-22 raptors (originally planed). Currently, the plan is to build a total of 187 F-22As. The USAF protested Congresses decision to eliminate the Raptor program. The USAF argues that if it was able to maintain 300 raptors it could provide air supremacy over the continental United States. RAND, a prominent think tank, issued a report to Congress about restarting F-22A production. Should Congress reverse its decision, RAND calculated the cost of restarting Raptor production and building 75 Raptors would make the fly away cost of each Raptor 225 million. (150 million before production stops) Honestly If Congress had the guts to keep the Raptor program going costs would have continued to drop as mass production ensued.

However the most important contribution of the F-22 was the technology used in the F-35 its cheaper more cost effective cousin, was refined on the F-22. The F-22 allowed for the progression of new technology. The F-35 features a more durable cheaper radar absorbing coating and the same platform alignment stealth features of the F-22. So in the end Raptor was an important project as it allowed for the more practical cheaper F-35 to be produced. However, by no means is the JSF equal to the Raptor as a dogfighter. History will tell if the F-35 can stand up against future 5th generation threats. Betting that the JSF will be able to establish air superiority for the next 30 years is somewhat of a risk. The F-22A is a much safer choice. The Raptor uses the very best American technology and its design features no compromises. The F-22A was built from the ground up to be the very best air superiority fighter possible.

In conclusion, I believe Congress should have diverted additional funds for Raptor production even if it means taking the funding from the JSF. Congress should have given the USAF their 300 Raptors. These Raptors would provide a safe guard against future 5th generation threats from Russia and China. Additionally, the F-22A would be given the role of penetrating enemy airspace and taking out radar stations so the less stealthy F-35 could go on through with reduced risk. The American F-35 is stealthy enough to penetrate CURRENT radar systems. In terms of long term viability, the F-22 is once again the safer choice; it has an rcs 10 to 15 times smaller than the JSF. But in the end, 187 Raptors is a formidable force. I do think the JSF will be able to handle most threats the United States will face for the next 3 decades. I just think its better to have some kind of insurance.
Posted by Matt at 9:22 AM No comments: