On November 23rd, China launched a single fixed wing aircraft from a carrier for the first time. Welcome to the club China, we've been waiting for you for over 100 years (one of the first aircraft launches from a ship at sea preformed in 1910 by the U.S Navy). Although the previous comparison is not entirely fair, it does illustrate an important point, China most recent achievement should be put into context before determining its full significance. Many news organizations cite this event as proof of China's rise to power in the Asia-Pacific region. In reality, the situation is far more complicated.

The J-15 itself is a knock-off of the Russian Su-33, a member of the Su-27 family of aircraft. China was unable to secure an acquisition agreement with Sukhoi due to concerns of potential intellectual property violation. In lieu of buying navalized Flankers directly from Russia, the Shenyang Aircraft Corporation
managed to acquire a Su-33 from Ukraine in either 2001 or 2005 (Global Security, 2012). From the Su-33 acquired from Ukraine, Shenyang was able to reverse engineer the aircraft and build the J-15. The Su-33 in which the J-15 is based features an antiquated set of avionics and internal systems. In fact, the Su-33 has failed gain favor with the Russian armed forces due these deficiencies. The Mig-29K will be utilized by both the Indian Navy and Russian Navy (once the retrofit of Admiral Kuznetsov is complete) instead of the Su-33 (Russian Navy Webpage, 2012). The J-15 is limited even further by the Liaoning itself. The Liaoning features a ski ramp design rather than a steam catapult system. The advantage of the steam catapult system is assists aircraft into the air by supplementing the jets own power which allows for a greater take off weight. Although the Su-33 is theoretically capable of carrying 6,500 kg of ordinance, in practice it will not be able to carry its full combat load on its own power (Axe, 2012).

In summary, the J-15 does not change the balance of power within the Pacific or give China a substantial advantage in a future conflict. Before the J-15 becomes a credible threat:


It is unlikely that all of these criteria will become a reality for at least 20 years. The Chinese Navy has taken its first steps to becoming a true carrier force but it has a long way to go. In the meantime, the United States operates eleven 100,000 ton super carriers with full carrier air wings supplemented with their strike group of submarines, destroyers, missile cruisers, and supply ships. 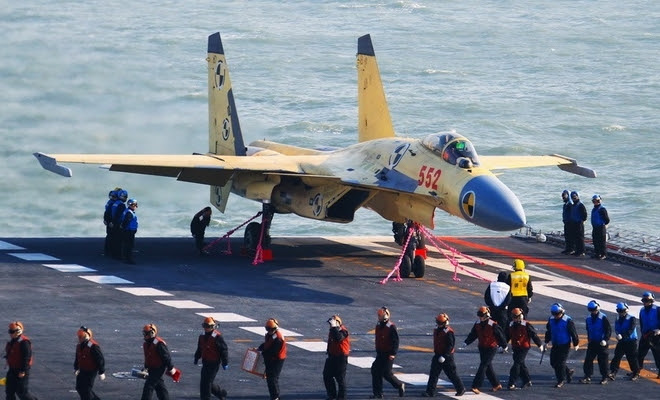 Author's Note: Unsurprisingly a great deal of information about China's new stealth fighter is unknown. Specific details such as radar cross section figures are nonexistent at this point. Estimates and theories comprise the bulk of public "knowledge" about the J-31 and are thus subject to change and scrutiny. As a side note, I'm sorry for the late post but being a full time student and finding the time to write these is pretty hard.

It has been more than a month since China's second stealth fighter made its public debut. A cloud of speculation still shrouds China's second stealth fighter. Even its exact designation has not been confirmed hence the use of the J-21, J-31, and F60 designations by many sources (they all refer to the same aircraft). The primary purpose of this article is to list what few details are  known about jet. Following this, the article will discuss the educated guesses by aviation experts as to its origin, purpose, capabilities, and impact on the region.

Image 1: Among the first images of the J-31 released. The aircraft shown is designated 310001 hence the theory that the aircraft is designated as the J-31. Furthermore the writing on the tail, 鹘鹰, is Chinese for “Falcon Eagle” (Cenciotti, 2012). Hence, the J-31 designation will be used for the remainder of the article.

What is Known
Origin and Purpose

As stated before there are virtually no details as to the circumstances of development or resources devoted to the J-31 project. The J-20, China's first stealth fighter, is being developed and built by Chengdu aircraft corporation/conglomerate. However, the J-31 made its debt outside of a Shenyang corporation airfield. Shenyang the chief competitor to Chengdu.

"The various plants of the Avic group, such as Chengdu Aircraft and Shenyang Aircraft, have a long tradition of rivalry. To overcome that, the group began bundling them together from 2008 into specialist subsidiaries in which they were supposed to work together. But the defense ministry opposed tight integration of the defense subsidiary—including Chengdu and Shenyang—in order to maintain closer control and probably to retain and foster competition among them."  - Bill Sweetman

Some theorize is possible that the J-31 lost to the J-20 in a fighter aircraft competition. However, the design differences between the J-31 and J-20 suggest they were designed with completely different roles in mind. The J-20 bears many of the characteristics of heavy fighter or strike aircraft vs the lighter build of the J-31. It is unlikely that the two aircraft competed for the same role. Traditionally the PLAA has a history of procuring a light and heavy fighter.

“In traditional PLA thinking, there has always been a necessity for ‘light’ plus ‘heavy’ in terms of equipment.” - Gary Li, 2012

The most plausible theory put forward is that the J-31 will serve as a light fighter supplementing the heavier J-20. Both aircraft are in their prototype stages. However, it is also possible that the J-31 is merely a test aircraft and not a prototype with a finalized version to enter production. The United States built several prototype stealth aircraft that never entered service e.g. the Lockheed HAVE BLUE demonstrator aircraft.

Shenyang took a conservative approach in designing the J-31 as it extensively borrowed from features from the Lockheed F-22 and F-35. The design similarities between the J-31 and the Lockheed developed stealth fighters leads many experts to believe in industrial espionage on the behalf of Shenyang occurred. (Cenciotti, 2012) Both Lockheed Martin and the Pentagon have been the target of multiple cyber attacks from China. It is plausible that classified design details were compromised during these attacks.

The shaping of the intakes on the J-31 bear remarkable similarities to those on the F-35. The tail design and chined nose emulate the F-22 closely (However J-31 design features conventional tail nozzles).

Of particular interest to some observers is the use of twin wheels on the front landing gear. Aircraft featuring twin wheeled landing gear are typically carrier based aircraft. However, the implementation of a twin wheeled landing gear system is hardly grounds to suggest the J-31 is destined for carrier operations. Building a stealth fighter is difficult. Building a stealth fighter for carrier based operations is extremely difficult. Its unlikely that the second stealth fighter ever produced by China would be carrier capable. Carrier based aircraft must include fold-able wings, tail hooks, strengthened heavy landing gear, and an extremely durable airframe that can take the structural strain of carrier landings. The current J-31 design only features ONE of the listed criterion, possibly two. Furthermore, the J-15 is already been developed for carrier use on the Liaoning.

Bill Sweetman believes the J-31 is equipped with twin Russian RD-93 engines. China's domestic jet engine designs continue to prove problematic and demonstrate poor performance and reliability. The J-31 is further hampered by China's lagging domestic fighter radar designs. For example, the domestically produced radar used in the 4.5 generation J-10 can track 10 targets while engaging 4 targets vs the F-15's AN/APG-63 (V) 1 radar built in the 1990s can track 14 and engage 6 targets. Without sufficiently capable internal systems, the J-31 will look externally impressive but will be outclassed by other 5th generation fighters.

My own preliminary report on the J-31:

http://www.flightglobal.com/news/articles/pictures-new-chinese-fighter-conducts-maiden-flight-378353/
Posted by Matt at 12:42 PM No comments: