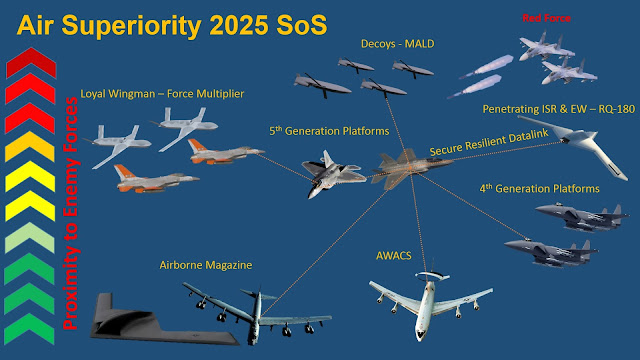 In maybe a week or so I will publish a multi-part article series upon material I wrote for courses at the Elliott School. The article will make the case for a systems of systems (SoS) solution to air superiority between 2025 and 2030 as a means to ease the transition to a manned 6th generation fighter platform with an expected initial operational capability between 2035 and 2040. Below are a couple of slides from the presentation.

Colonel Michael W. Pietrucha’s concept for a semi-autonomous force multiplier UCAV outlined in, The Next Lightweight Fighter, serves as a valuable starting point for conceptualizing the role and requirements of the loyal wingman concept,
The UCAV will not replace the manned fighter aircraft – we cannot build a control system to replicate the sensing and processing ability of trained aircrews. Nevertheless, UCAVs may play a valuable role as a supplementary system. Not remotely piloted aircraft, they will operate semiautonomously, serving as literal wingmen of limited capabilities. We can build the technology to fly an aircraft and execute the preprogramed routines. The ‘brains’ of the operation will remain the nearby human, who needs only to tell the UCAV what to do and (mostly) forget about it.[1]
The UCAV would not be a dogfighter in the traditional sense. Rather, the UCAV would act as a “missile truck” for 5th generation assets given the limited internal carriage of weapons in the F-22 and F-35. Therefore, the design can sacrifice many of the design attributes associated with high-end maneuverability in favor of payload, endurance, and range. Pietrucha outlines three modes from which his proposed F-40 Warhawk UCAV could operate: autonomous, semi-autonomous, and cooperative. However, Pietrucha’s vision of autonomous capabilities are relatively modest much as basic aviation capabilities related to navigation of predesignated locations and weapons employment against fixed targets. In the Air Force publication, Autonomous Horizons, the Office of the Chief Scientist mirrors many of Pietrucha technical feasibility reservations regarding fully autonomous combat aircraft.[2] 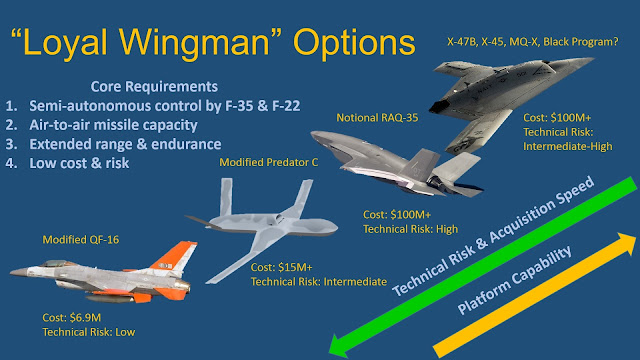