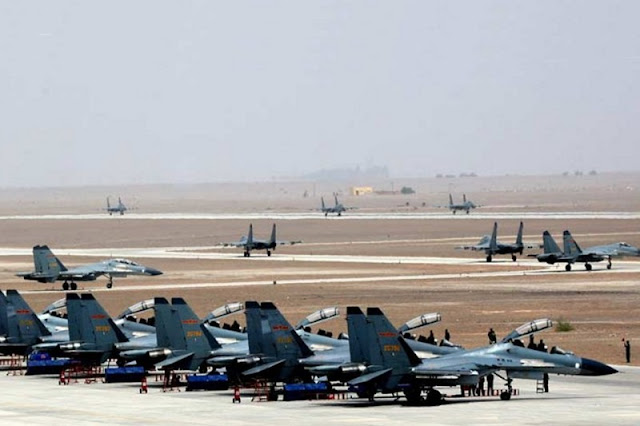 As part of the "Countering Foreign 5th Generation Threats" series, this article will focus on broader trends within the PLAAF fighter force with respect to preparing for local wars under "informatization" conditions in the 2020 to 2030 time frame.

For information on specific types of PLAAF fighter aircraft and avionics, please refer to the following articles:

As of 2014, the PLAAF fields 200 J-10A aircraft and roughly 300 Flanker derivative aircraft including the J-11A, J-11B, Su-27SK, Su-27UBK, and Su-30MKK (Flight Global World Air Forces, 2014). Production of these fourth generation aircraft by Chengdu and Shenyang is likely to accelerate over this decade to facilitate the replacement of the J-7 and J-8. Chengdu is expected to produce 200 J-10 aircraft over the next five years with at least 30 of the more advanced J-10B variant being produced each year (Fisher, 2015). According to the International Institute for Strategic Studies report The Military Balance for the years 2012 and 2014, the PLAAF and PLANAF added an additional 88 J-11B aircraft to their fighter forces within a two year period. While most literature on the PLAAF acknowledges the shift from third generation to fourth generation platforms, the substantial performance disparity among the new fourth generation aircraft is frequently overlooked.

By Western standards, much of the PLAAF's current fourth generation fleet is not modern. For example, the N001, N001VE, and Type 1493 mechanically scanned radars equipped on the PLAAF Flanker fleet is comparable to 1980s US systems. The major limitation of these older mechanically scanned arrays is the PLAAF cannot fully utilize its numerical superiority as its fighter radars are limited in their ability to simultaneously track and engage multiple targets and provide situational awareness. Modern active electronically scanned array (AESA) radars will enable 4.5 generation and fifth generation PLAAF fighters such as the J-10B, J-11D, J-16, and J-20 to fully utilize their large payload capacity for effective beyond visual range (BVR) missile salvos. The PRC has made significant progress in domestically produced BVR missile technology with the development of the PL-15. The PL-15 is powered by a ramjet which grants it an improved no escape zone and at least a 60 mile range; the missile also features an active seeker and two way data-link. Chief of Air Combat Command, General Herbert "Hawk" Carlisle indicated that fielding longer range missiles to out range the PL-15 is "an exceedingly high priority". General Carlisle's remarks are especially stark as it is not customary for USAF officials to publicly refer to specific systems developed by potential adversaries (Axe, 2015). 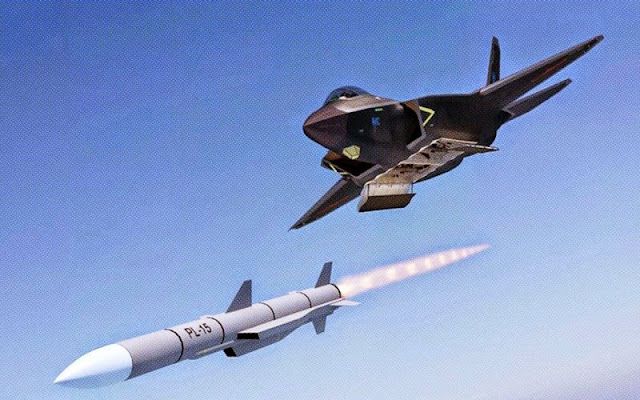 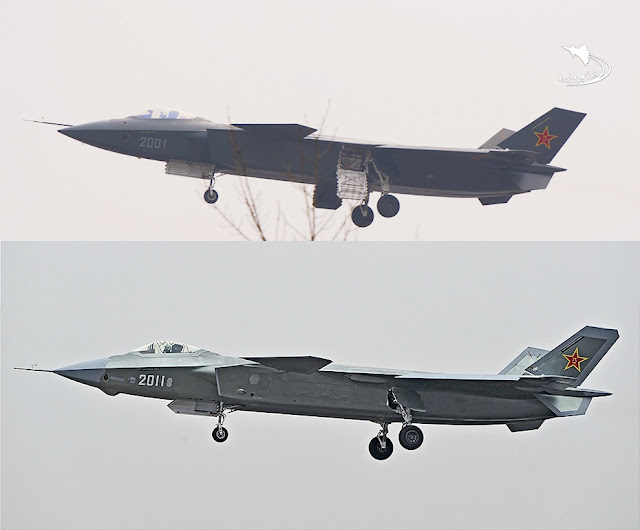 Image 4: Design alterations between the first and third J-20 airframes are clearly visible including the nose cone, diverterless supersonic inlets (DSI), and the possible inclusion of radar absorbent material coatings (RAM). The latest J-20 airframe designated 2016 includes an expanded fuselage towards the engines such that less of the unstealthy nozzles are exposed and an expansion of the DSI (Feng, Lin, & Singer, 2015).

Despite the recent media attention about China's stealth fighter programs, the bulk of China's air superiority capability will consist of non-stealthy 4th generation aircraft for at least another decade. The J-20 is expected to enter service between 2017 and 2018. Given the limited information within the public domain, the J-20 program appears to be progressing well as a total of seven prototype aircraft have been built since the initial debut in 2011 (Feng, 2015). The more recent J-20 airframes such as numbers 2011, 2012, 2013, 2015, and 2016 show a progression towards a stealthier production aircraft equipped with a large AESA radar and EOTS-89 electro-optical targeting system (EOTS). While externally impressive, the photographs of the new prototypes do not reveal the extent in which Chinese firms involved in the production of the J-20's avionics been able to write software that will effectively fuse the J-20's sensors to provide enhanced situational awareness. As the US F-35 program has demonstrated, the development of internal systems and software has generally been a more daunting task than the development of a low observable airframe.

Three main theories exist among Western defense/aerospace publications with respect to the role of the J-20, each has different implications on the number of J-20 aircraft the PLAAF is likely to acquire. The first theory is strait forward, the PLAAF has a history of fielding both low-end and high-end fighter aircraft and it is likely the J-20 will fill the air superiority high-end role (Gary Li, 2012). Two issues hinder the J-20's current utility as a high-end air superiority fighter: (1) its lack of sufficiently powerful engines and (2) its exposed engine nozzles. Current prototypes use a pair of imported AL-31F engines from Russia which produce a maximum of 27,500 pounds of thrust each compared to the estimated 70,000 pound plus weight of the aircraft will a full load of fuel and munitions. Bill Sweetman argues the lack of rear aspect stealth is likely an intentional design choice based on the assumption that high speed stealth aircraft can tolerate a relatively higher aft radar cross section (rcs). Assuming the J-20 receives adequate engines, proponents of the high-end fighter theory argue the J-20's delta wing canard airframe will grant it exceptional maneuverability and high angle of attack capability. If the J-20 serves as the high-end component of the PLAAF fighter force, a final production run of at least a few hundred airframes is plausible. 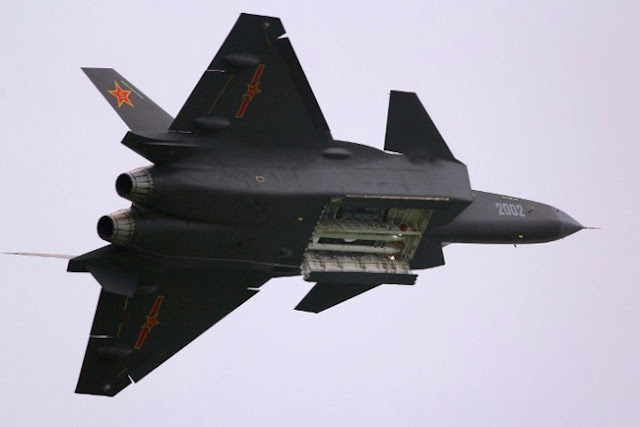 Image 5: J-20 weapons bay door on the second prototype aircraft designated 2002. Along with the two side bar doors which can carry one IR guided missile each, the J-20 has the capacity to carry at least six air-to-air missiles.


The U.S. has committed its armed forces to concentrate much of their funding on tactical fighters with a combat radius of 600 mi., much less than the distance from their bases to targets on the Chinese mainland, and has persuaded its allies to do the same. As a result, operations are almost entirely dependent on two groups of aircraft: tankers and large intelligence, surveillance and reconnaissance (ISR) aircraft with long endurance. Under the 'distributed control' concept favored by U.S. Air Force commanders as a hedge against electronic warfare, including cyberattacks, the ISR aircraft also have a control-and-communications function. However, both tankers and ISR aircraft are vulnerable to attack, and maintaining a defensive combat air patrol (CAP) over them at long range is also difficult.

By targeting the enablers of US power projection in the Western Pacific, the J-20 would assist in denying the US the ability to sustain operations in the vicinity of China as part of a larger PRC A2/AD strategy. If the J-20 serves as a stealth interceptor, the niche role within the PLAAF would presumably require less aircraft than the high-end fighter role.

The third theory is that the aircraft is optimized as a air-to-ground strike aircraft given its large internal fuel and payload capacity. The J-20 would penetrate through US & Japanese air defenses and strike targets within the first and possibly second island chain. Propoents of the strike bomber theory argue that the J-20 would be a useful complement to the larger non-stealthy H-6. While the H-6 bomber has the range to strike targets within the first and second island chains, its large radar cross section would not enable it to deliver precision guided munitions in a highly contested environment; the H-6 would be forced to utilize stand-off weapons such as cruise missiles.

Of the three theories, the stealth interceptor role is the most plausible in the short-term given the lack of high performance domestically produced jet engines. Over the long-term, it is likely that domestic development of a high performance turbofan engine will enable the J-20 to become a formidable air superiority aircraft capable of fulfilling both the high-end and stealth interceptor roles in the PLAAF fighter force. 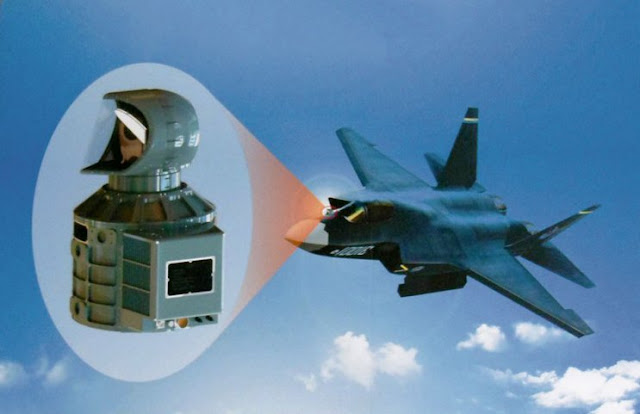 Image 6: FC-31 EORD-31 IRST sensor. Chinese media sources claim the EORD-31 can detect an F-22 at a range of 110 km (60 nm) and the B-2 at a range of 150 km (81 nm). These claims are highly suspect and are unlikely to be accurate given the verified performance figures of high-end IRST systems such as the Eurofighter's PIRATE IRST which has a range of approximately 50 km.

Since the first images of the J-31 became publicly available in 2012 until 2014, speculation has dwarfed known verified information regarding the aircraft's potential role as a low-end compliment to the J-20 or even as a carrier based aircraft. Since 2014 were the J-31 participated at the Zhuhai airshow, much more information on the aircraft has entered the public domain. It is now apparent the assumption that the J-31 would serve as a low-end compliment to the J-20 should be seriously questioned on the basis that it is unlikely the aircraft will enter domestic use within either the PLAAF or PLANAF. Shenyang consistently refers to the aircraft as the FC-31 which is an export only designation. The different public treatments between the J-20 and FC-31 by the PLAAF is indicative of their different roles:


What looks like a thoroughly modern stealth fighter is apparently not good enough to serve as China's next medium-weight combat aircraft...The J-20 was revealed in late 2010 and appears to have made its first flight in January 2011. It was not promoted at Zhuhai. And therein lies a key piece of evidence of the status of the J-31. The J-20 was not at Zhuhai because it is not for sale and because China does not want to reveal too much about it. It is intended for the Chinese air force. Conversely, because the J-31 was exhibited at Zhuhai and is promoted as an export product, the Chinese air force obviously does not want it.- Perrett, Hewson, Johnson, & Sweetman, 2014

Part III will discuss improvements to PLAAF training and tactics as well as PRC knowledge of American capabilities as a result of cyber espionage. Lastly, an analysis of PLAAF modernization challenges and current shortfalls will be presented. Part IV will discuss the growing importance and role of passive senors in a mixed fourth-fifth generation dogfight.

Sources (In Addition to Part I)