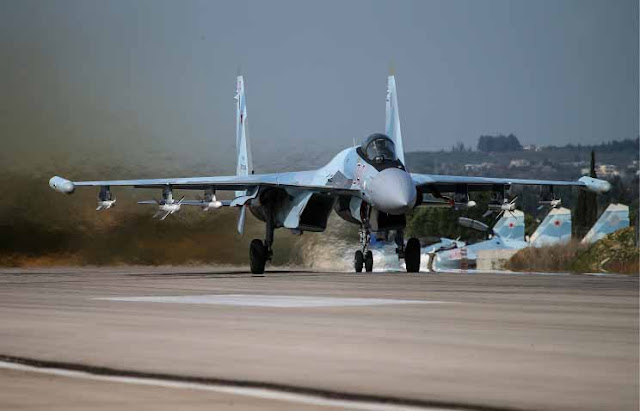 Image 1: R-77-1 mounted on the inner most wing pylon of an Su-35S deployed to Syria. Note the supplemental Khibiny-M EW/ECM pods on the wingtips.

The most advanced medium-range BVR ARH missile in the VKS inventory is the R-77-1; the missile is also referred to as the RVV-SD and Izdeliye 170-1 in Russian language sources. The R-77-1 is a modernized variant of the original R-77 (Izdeliye 170) AAM developed during the early to mid-1980s. The baseline R-77 was produced by the Molniya OKB in Ukraine in limited quantities solely for testing purposes until 1994. In 1993, the Russian Air Force ordered the R-77 production line and all further developmental activities be transferred to Vympel NPO in Moscow.[1] As a result of financial difficulties during the 1990s, the Russian Air Force did not adopt the R-77 into service. Vympel relied upon sales of the export variant of the R-77, the RVV-AE, to sustain the R-77 production line. At least 750 RVV-AEs have been sold to the PRC and at least 1,000 RVV-AEs were sold to India; Malaysia, Indonesia, Sudan, Syria, and Peru also have stocks of RVV-AE missiles for use on their MiG-29 and Flanker fleets.[2]

The Russian Air Force ordered its first batch of improved R-77-1 missiles in 2009 in tandem with its initial Su-35S purchase, deliveries of R-77-1 missiles began in 2011. According to editor-in-chief of the Moscow Defense Brief, Mikhail Barabanov, the VKS ordered two additional batches of R-77-1 missiles in 2012 and 2015 which are expected for delivery between 2016 and 2017; the 2015 contract is worth 13.175 billion rubles ($226 million) which roughly equates to more than 220 missiles.[i] Barabanov further notes that the VKS is unlikely to have “sufficient” stocks of R-77-1 missiles until the latest batches are fully delivered.[3] However, it is unclear if the contracted R-77-1 purchases will prioritized for the Su-35S fleet or will be evenly distributed amongst the VKS’ fighter forces such as the Su-30M2 and Su-30SM regiments.

In February 2016, operationally deployed R-77-1 missiles were observed for the first time on the Su-35S. However, as of April 2017, the vast majority of Russian fighter aircraft photographed in Syria and those conducting aerial intercepts over Europe continue to be predominately armed with R-27 AAM.

The R-77 is 3.6 meters long, has a diameter of 200 mm, and a launch weight of 175 kg. The baseline variant has a maximum kinematic range of 40.5 nm or 75 km. The missile’s most distinguishing trait is its use of lattice fins which provide excellent subsonic and supersonic maneuverability performance. However, lattice fins tend to generate greater drag than conventional control surfaces at transonic speeds and generate larger radar returns.[4] The R-77’s guidance system comprises of an inertial midcourse system with radio updates as well as an Agat 9B-1348 X-band monopulse active radar terminal seeker which has a home-in-on-jam capability. The slightly modified 9B-1348E in the RVV-AE can detect a 5m^2 target at a range of 16 km or a 0.0002m^2 target, F-22’s frontal RCS, at 1.27 km.[5] Unlike the R-27, the R-77 utilizes a laser proximity fuse to activate the missile’s 22.5 kg blast fragmentation warhead. In principle, a laser proximity fuse equipped AAM should be more effective detecting low observable targets and successfully cueing the warhead when compared to a radar proximity fuse equipped AAM.

The R-77-1 is an evolution of the original design and features a more streamlined nosecone, software updates, and enlarged fuselage which is 17 centimeters longer and 15 kg heavier than the baseline R-77. In terms of performance, the R-77-1 has an extended kinematic range of 60 nm (110 km) and incorporates the improved 9B-1348-1 seeker which features a more powerful transmitter and receiver over the baseline 9B-1348.[6][7] 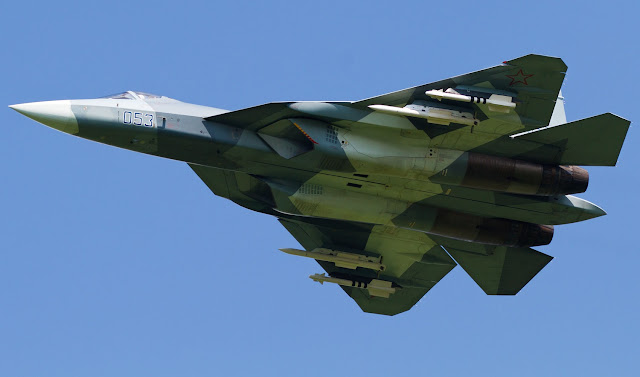 The R-77M (Izdeliye 180) is a “deep modernization” of the original R-77 design which replaces the lattice fins with conventional tail control surfaces for RCS reductions and improved transonic drag performance, incorporates a modernized active terminal seeker produced by Istok (possibly an AESA), and an improved dual-pulse rocket motor which will more than double the range of the original R-77 missile to roughly 81 nm + (150 km+).[8][9] In 2007, the Russian Air Force planned to field the R-77M by 2010, but the absence of operationally deployed R-77M missiles in 2017 suggests either budgetary or technical issues have impaired the R-77M program.[10] Russian defense publications often report the R-77M is the principal BVR weapon of the PAK FA which would suggest an entry date around 2020. However, As of February 2017, all R-77 external captive carry tests with the PAK FA feature the R-77-1 not the R-77M. Therefore, Russia’s fighter forces will likely continue to rely upon the R-77-1 until at least the mid-2020s as its primary AAM. Similarly, the ramjet powered R-77ME has been proposed since at least 1999 when a mockup was presented at that year’s Farnborough airshow, but little credible evidence within the public domain suggests that the R-77MD’s development has progressed.

The internally stored components of the Khibiny-M system cover the H-J (X to Ku) bands while the optional wingtip mounted pods cover the E-G bands (S to X). The Khibiny-M is likely linked to the L150-35 RWR to enable several common ECM and EW techniques such as noise jamming, repeater jamming, and deceptive electronic counter measures (DECM).[12] The basis for all ECM systems is for the jamming signal to exceed the skin return of the aircraft from the perspective of the adversary radar.[13] For example, when an adversary radar is within range of a repeater ECM equipped aircraft, the ECM suite detects the radar pulse against the skin of the aircraft (skin return), amplifies the skin return, and repeats the false signal at random intervals back toward the adversary radar. This technique effectively masks the location of the aircraft by generating false targets on the adversary’s radar.[14]

Surviving until the merge will be critical for Su-35S pilots engaging fifth generation aircraft because their adversary’s use of stealth will both severely diminish BVR opportunities and degrade radar guided AAM PK performance in terms of terminal seeker sensitivity and radar fuse failures. Under ideal conditions for VKS pilots, Su-35S’ would be directed toward stealthy aircraft via external long-range sensors such as VHF radars or extremely sensitive emissions detection systems. Compared to fifth generation aircraft, the Su-35S is more reliant on its ECM/EW suite to protect the aircraft until the merge at WVR given its much larger RCS. All of these techniques require knowledge of the adversary radar’s location identified by the RWR. However, U.S. AESA equipped aircraft operating in low probability of intercept (LPI) mode will prove significantly more difficult for the Su-35S to detect, track, and jam.

A major determinant of the Su-35S’ effectiveness against Western militaries will be the ability of the Khibiny-M to degrade the probability of kill (PK) of the AIM-120D AAM. The AIM-120D features an X-band monopulse terminal seeker with a diameter of approximately 178 mm and a home-in-on-jam capability against noise jamming emitters.[15] Furthermore, monopulse radars are inherently immune to signal amplitude modulation jamming because they generate an error signal based upon each pulse.[16] Arguably, the greatest deficiency of the AIM-120D is its limited sustained kinetic performance compared to emerging ramjet powered AAMs such as the MBDA Meteor. The AIM-120 has a historical PK of 0.46 against Iraqi and Serbian Air Force aircraft, but both EW and missile guidance technology have significantly progressed since the 1990s such that the historical PK is likely no longer informative of the current PK. Because both the AIM-120D and Khibiny-M’s most sensitive specifications are not likely to be released, I believe there is significant uncertainty regarding the ability of the Su-35S to close to WVR of fifth generation aircraft without sustaining substantial casualties.

The Su-35S’ MAWS can detect the launch of a man-portable air-defense system (MANPADS) from 10 km away (6.2 miles) as well as SAM and AAM launches at 30 km (19 miles).[17] Very little information on the Su-35S’ MAWS exists among English language sources, but the system should in principle give VKS pilots greater reaction against missile threats. MAWS are particularly useful in defending against IR and other types of passive guided AAMs which will avoid detection on the aircraft’s RWR.