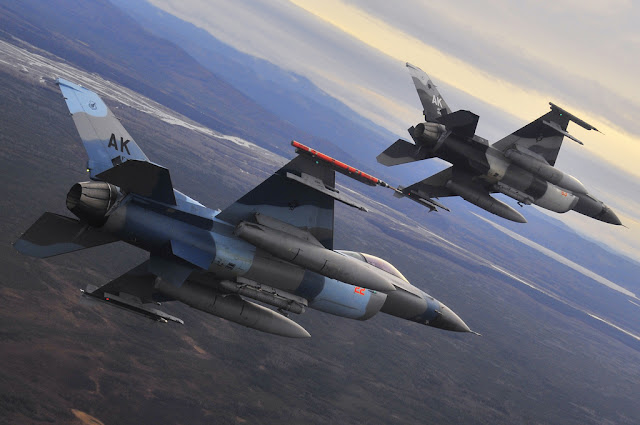 Although Red Flag was originally developed to re-institute dogfighting skills among USAF pilots, it has become much more comprehensive. Current Red Flag exercises encompass surface to air threats, air to ground strike missions, space warfare and information warfare elements (e.g. electronic based attacks to GPS and cyber threats). The addition of these new elements will be critical to future conventional conflicts. The United States Military is heavily reliant on space based assets. The disruption and destruction of space based assets is a very real threat U.S forces will encounter in future large scale conventional wars.

Electronic warfare can be carried out through the use off-the shelf technology at low cost. For example, denying the use of the Global Positioning System is a fairly easy task to accomplish but would greatly diminish the effectiveness of many precision guided munitions (PGUs), navigation, and drone control. In 2011 North Korea jammed GPS signals along the border during the Operation Key Resolve, a joint South Korean - American military exercise (Source 1). GPS jamming and other simple electronic warfare tactics enable a less sophisticated force to more easily engage a higher tech. force. Preparing American and allied forces with the skills necessary to overcome electronic based attacks is imperative. To that end, the 26th and 527th Space Aggressor Squadrons replicate attacks to Blue space based assets at Red Flag. Dave Majumdar explains:

Information and cyber warfare have become increasingly important aspects of training at Red Flag Nellis. The 57th and 117th Information Aggressor Squadrons launch cyber attacks on U.S facilities to prepare trainees for cyber attacks and test vulnerabilities of U.S bases. The combination of the information aggressors and space aggressors is a realistic threat environment.

"...the Information Aggressors simulate attacks on Blue Force computer networks and information systems. At the same time the 57th and 177th Information Aggressor Squadrons (57th and 177th IAS) might attempt to infiltrate Blue Force bases- including their dorms- to search for intelligence useful to the Aggressors during the simulated war. Combined with the aerial Aggressors flying the F-15 Eagle and F-16 Fighting Falcon fighters, these Aggressor forces mount a coordinated offensive against the Blue Force during exercises...
Similarly, in order to replicate the very real danger of computer network infiltration attacks the 57th and 177th Information Aggressor Squadrons stage elaborate attacks on various USAF installations in order to test their defenses...Toth said that due to the serious nature of the threat, the simulated attacks have to be very realistic. The bases that are subject to a simulated network attack by the Aggressors are not given any prior warning, Toth stated. He added that only a few seniors officer are given prior notice of these 'stimulation exercises' in order to ensure that the Aggressors tactics are not mistaken for an actual attack on the USAF network." - . Dave Majumdar 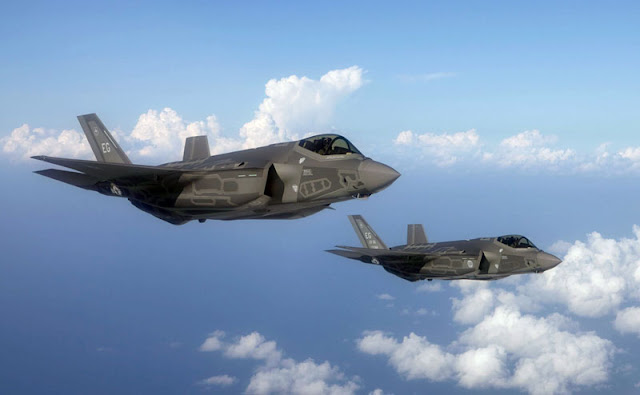 Red Flag will continue to play an important role in preparing U.S pilots for war. F-35 pilots in particular must learn how to exploit the capabilities of their aircraft to their advantage. It is imperative tactics are developed to most effectively utilize the stronger aspects of the F-35's maneuverability characteristics (e.g. good transonic acceleration and high AOA) while avoiding maneuvers that would play to an opponents advantage (e.g. F-35 has comparatively poor turning radius).

The USAF must also learn to effectively operate a mix of both older 4th generation aircraft in conjunction with its newer 5th generation aircraft. Hundreds of F-16's and F-15's will remain in service until at least 2030. For example, compatibility issues with communication systems and data transfers remain problematic.  Test and evaluation squadrons will likely experiment with mixed generation force tactics.

Since the start of Red Flag, the United States has yet to face a adversary with pilot training on par with its own. It is probable that within 10-15 years United States might not be able to take its training advantage for granted. In addition to rapidly upgrading the quality of its aircraft, China has also instituted a number of initiatives to increase the quality of its pilots. Around 1999 Chinese pilots logged an average of 100 flight hours per year. Chinese pilots now fly well over 100 hours per year and advanced fighter aircraft are flown close to 200 hours per year (RAND, 2011). In comparison  USAF pilots regularly fly between 250 to 300 hours per year (Source 16).

"Based on recent trends, these changes are likely to accelerate in the future, so that, within another decade, the capabilities of China’s air force could begin to approach those of the U.S. Air Force (USAF) today. USAF capabilities will continue to improve as well, of course, so that it will still enjoy a significant qualitative advantage, but a conflict with China might not be the lopsided contest it likely would have been in the late 1990s." - RAND 2011

"In 2008, PLAAF made over 1700 flights to but not past the middle line of the Taiwan straits. RF-16 used to occasionally go past middle line to get more intelligence on PLA installations, but is now getting locked on before even getting there. In some cases, PLAAF takes off in response before RF-16 even does so. It shows improved reaction time and professionalism in PLAAF." - Feng, 2011

It is paramount that the United States continues to fund and maintain training exercises like Red Flag to ensure a qualitative advantage. Current Aggressors under represent the threat USAF pilots will face.

"Right now, when an aggressor F-16 is replicating an enemy fighter like a Sukhoi Su-30 Flanker, it does not have an onboard system to simulate a weapon like the Vympel R-73 (NATO: AA-11 Archer). 'We do not have an IR [infrared] weapon on the aircraft that is similar to an Archer,' Barker says. 'So the F-16 pilot will use visual references that he has memorized to determine when the adversary airplane is in range and within the appropriate look angle.' Using the current configuration, there is no electronic system that tells the aggressor pilot if he is within the correct parameters for a valid missile shot. The shots have to be reviewed on the ground to ensure they are valid--even if they are called in real time during the training sortie. But the current system does not work well. 'Without a helmet--or at least a 9X CATM [Captive Air Training Missile]--the pilots have to basically spit-ball the threat WEZ and it is highly inaccurate,' one highly experienced USAF pilot says, 'So inaccurate that the feedback for training is useless most of the time.'' - Dave Majumdar