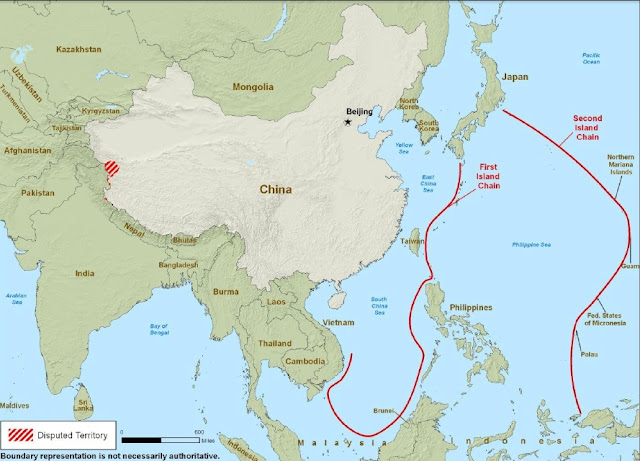 In terms of global perceptions, the belief that The People's Republic of China will supersede the United States as the dominant economic, political and military power in the 21st century is becoming increasingly widespread. However, in order to achieve true superpower status like the United States, China must achieve the ability to project hard power (military force) across the globe in addition to its already extensive soft power influence. Global power projection is not an immediate concern among current Chinese strategic planers. China's military procurement portfolio reflects the desire to consolidate and project regional power rather than to achieve global military influence. Of the roughly $150 billion dollars spent by the Chinese military (estimates range $120-$180 billion USD official military budget is $115.7 billion USD), a comparatively small portion is spent on the development of China's single aircraft carrier and its related systems. Three main areas in terms of military capabilities have benefited from a disproportional level of funding since the 1990s: regional air power capabilities, short & medium range missile capabilities, and submarine warfare capabilities. These investments do not actively project power over long distances like America's ten multi-billion dollar carrier strike groups. Rather, these systems deny a potential aggressor access to key areas of the Pacific region. For example, between 1995 and 2012, China domestically produced 39 submarines and bought 12 Kilo class submarines from Russia (Source 1). Only eight of these submarines are capable of sustained global deployment (nuclear powered). The People's Army Liberation Navy (PLAN) forwent the procurement of global power projection assets in favor of increased regional submarine warfare capabilities. The PLAN lacks a large inventory of fleet replenishment and oliers to sustain the continued operation of its largely diesel powered surface fleet. These oliers are required for large scale naval deployments thousands of kilometers from Chinese naval ports. If the PLAN valued increasing its global power projection capabilities in the short term, it would have allocated a more substantial sum into assets like oliers and fleet replenishment vessels. The trade off made between oliers and an increased regional submarine presence is generally representative of current Chinese military thinking. As a whole, the selection of equipment by the Chinese military does not demonstrate an interest in global power projection at this time. The first part in this series will examine the primary strategic objectives China seeks to achieve. Subsequent parts in this series will examine the individual components of China's anti-access strategy listed above.

The Chinese military has been tasked with three main strategic objectives: maintain the capability to defeat Taiwan in the event of a military conflict, deny foreign intervention in a China-Taiwan War (e.g. keep the United States from aiding Taiwan), and secure China's continued access to natural resources (Source 2). In order to achieve these goals, China's strategic planners have devised the island chain strategy shown above in image 1. Under the plan, Chinese military forces will eventually be capable of projecting power up to the second island chain and deny US forces from operating within the island chains if necessary. The ability to project power out to the first line of island chains will be accomplished before power projection can be readily applied out to the second island chain. Chinese forces are already capable of projecting power out to the first island chain.

"China’s active defense strategy has a maritime component that aligns with the PRC’s 1982 naval maritime plan outlined by then-Vice Chairman of the Military Commission, Liu Huaqing. This naval strategy delineated three stages. In the first stage, from 2000 to 2010, China was to establish control of waters within the first island chain that links Okinawa Prefecture, Taiwan and the Philippines. In the second stage, from 2010 to 2020, China would seek to establish control of waters within the second island chain that links the Ogasawara island chain, Guam and Indonesia. The final stage, from 2020 until 2040, China would put an end to U.S. military dominance in the Pacific and Indian Oceans, using aircraft carriers as a key component of their military force." -  Stacy A. Pedrozo, Capt, JAGC, USN, U.S. Navy Military Fellow, Council on Foreign Relations 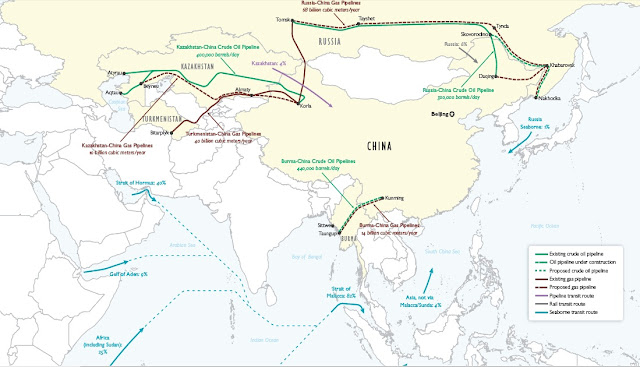 The third objective given to the Chinese military is to secure China's continued access to imported natural resources.

"Beijing is increasingly dependent upon imported energy to sustain its economy. A net oil exporter until 1993, China still lacks trust in international energy markets...In 2009, China imported approximately 56 percent of its oil and conservative estimates project that China will import almost two-thirds of its oil by 2015 and three-quarters by 2030...A second goal of Beijing’s foreign energy strategy is to alleviate China’s heavy dependence on Sea Lines of Communication (SLOCs), particularly the South China Sea and Strait of Malacca. In 2010, over 80 percent of China’s oil imports transited the South China Sea and Strait of Malacca." - Source 2

A somewhat antiquated view holds that China seeks to establish naval and air bases along key oil routes to ensure its continued access to these resources (string of pearls strategy). China response to Pakistani invitations to build a naval base at Gwadar is not one of exuberance. However, China continues to invest heavily in Africa including substantial investments in ports. Although the relative merits of the string of pearls argument is somewhat questionable, China's intention to secure its access to oil supplies is undeniable. The Strait of Hormuz and the Strait of Malacca are of particular interest to China.