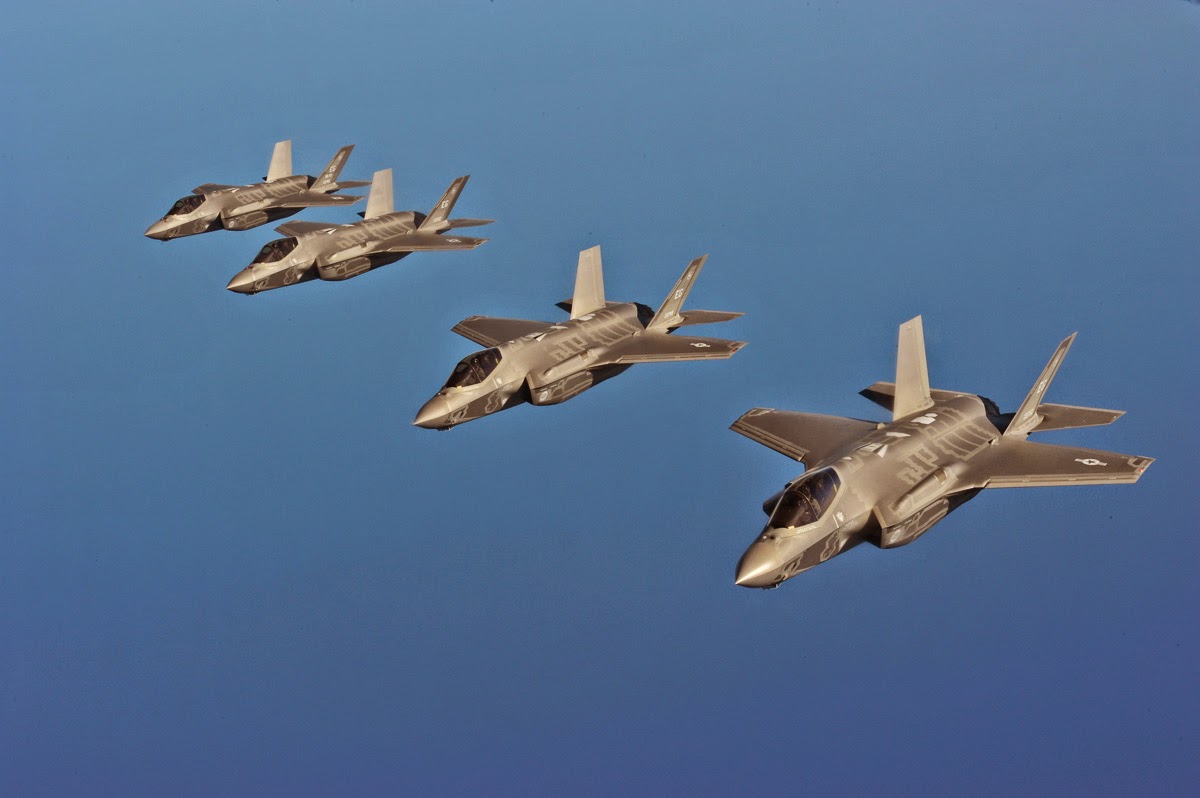 Relevant Arguments from The Russian Approach and The American Approach – Part I:

The air campaign in Vietnam was a significant learning experience for the USAF not only in terms of highlighting the importance of fighter maneuverability, institutionalizing dogfighting skills, and retaining an internally mounted gun - as commonly discussed by scholars and USAF officials, but also in terms of highlighting the importance of situational awareness. After the relative ineffectiveness of the USAF against Vietnamese Migs, the Air Force compiled its findings in the Project Red Baron report with the goal of improving American air to air capabilities. One of the key findings of the Red Barron report was the majority of American airmen who were shot down did not see their adversary until it was too late (Laslie, 2013). Robin Olds, a triple ace and one of the most distinguished American airmen who served in both World War II and Vietnam, described an encounter with Vietnamese Mig 21s for the Air Force Historical Research Agency (AFHRA):

"Going in a pair of MiG-21s hit us, two of them, and they came in supersonic from six o'clock high and was [sic] right on top of us before we ever knew anything about it,  launched a bunch of missiles, and shot down two of my F-4s. Bang. Just that fast. I turned around, I heard them scream, I turned, and all I saw were two burning objects on  the side….these MiGs were gone, supersonic." 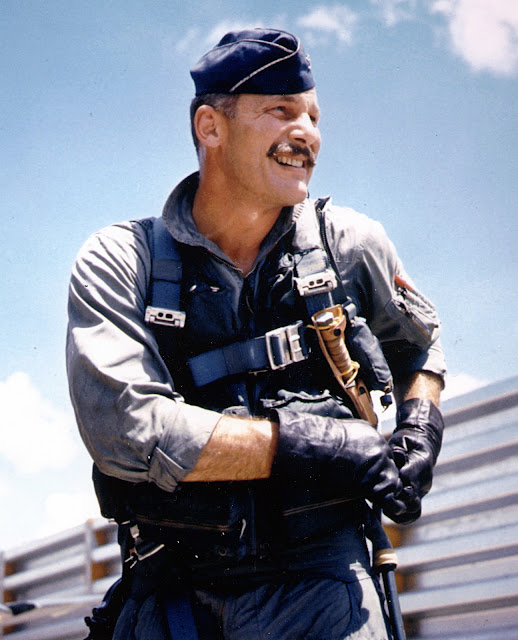 Image 2: Robin Olds was an extremely influential American aviator who argued for greatly expanding basic dogfighting skills as part of standard fighter pilot training. Among his many accomplishments, Olds was responsible for orchestrating Operation Bolo which was both the largest and most successful air-to-air engagement carried out by American forces during the Vietnam War. Olds was also well known for his trademark non-regulation "bullet proof" handlebar mustache. NY Times obituary

Significant investments in radar technology, command, control, communications, computers, intelligence, surveillance, and reconnaissance (C4ISR) equipment and the institutionalization of new techniques, tactics, and procedures (TTP) and concepts  - such as John Boyd's OODA loop in the 1970s and 1980s, revolutionized the approach in which the USAF used established air superiority. The results of the USAF's approach to establishing situational awareness greatly contributed towards the lopsided engagements favoring Coalition forces in the Persian Gulf War.

Similarly, the development of stealth technology in the mid 1970s enabled the USAF to greatly degrade an enemy's situational awareness by both limiting the effectiveness of enemy radars and enabling allied aircraft to destroy enemy command and control assets in the opening hours of a conflict. For example, F-117A destroyed Iraqi command and control facilities and Integrated Air Defense Systems (IADS) with impunity at the onset of the Gulf War which limited the effectiveness of the Iraqi Air Force for the remaining duration of the conflict. 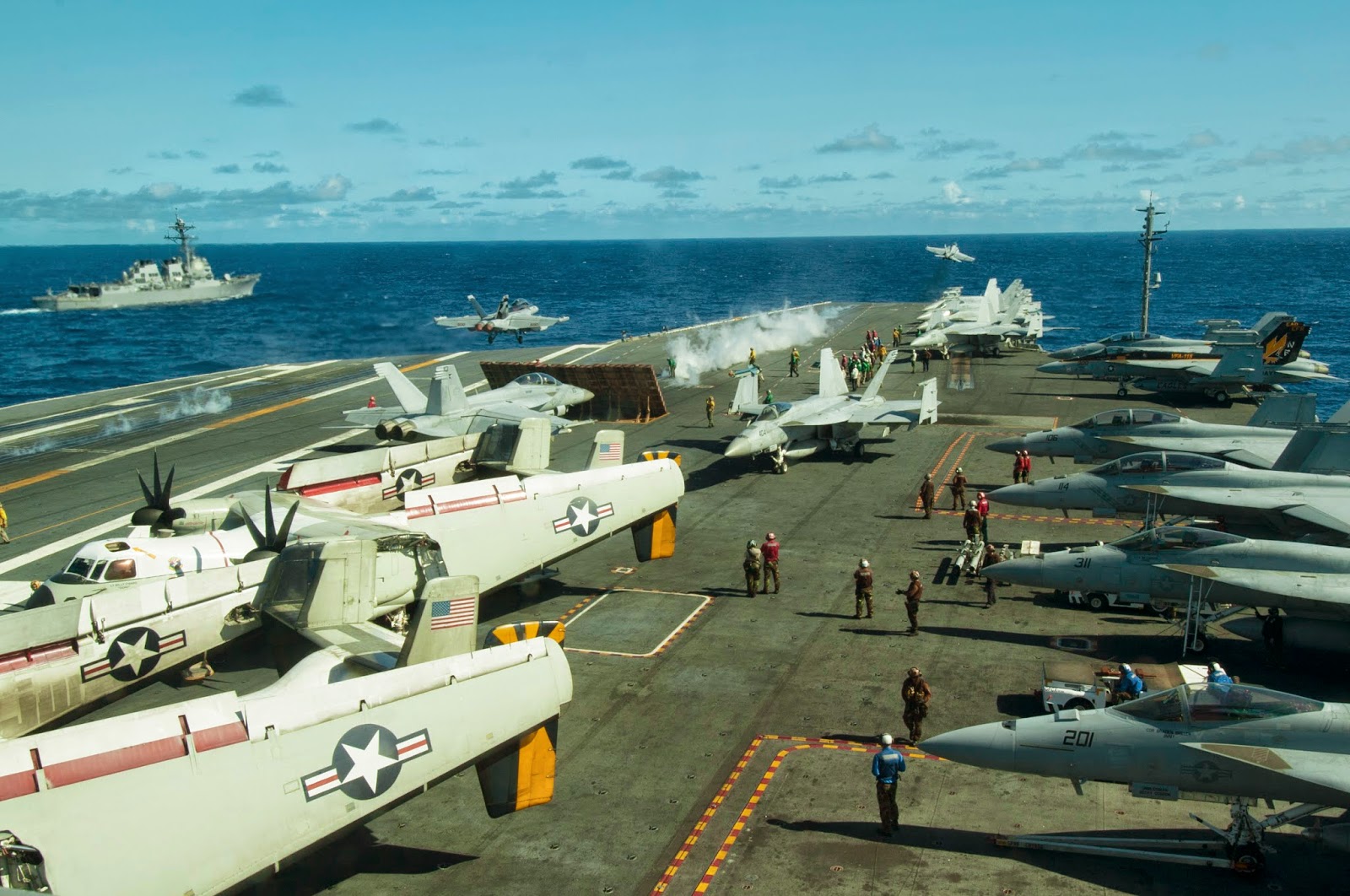 Image 3: Flight deck of USS George Washington in the Pacific

As stated in part I of this series, one cannot draw meaningful conclusions of force effectiveness by merely reviewing the specifications of two opposing fighter aircraft (e.g. thrust to weight ratio vs. wing loading) to determine the probable victor. A comprehensive analysis to determine the future effectiveness of a nation's method of fighter employment must include consideration of its force doctrines, how its fighter aircraft preform within the nation's combined arms approach. In the case of the United States, fighter aircraft do not operate alone but as part of a larger networked force. For example, F-35C aircraft would coordinate actions as part of Naval Integrated Fire Control-Counter Air (NIFC-CA) concept:

"...targets spotted hundreds of miles away by one sensor—such as the emerging F-35C Lighting II Joint Strike Fighter (JSF) or E-2D Advanced Hawkeye intelligence, surveillance, and reconnaissance (ISR) aircraft—could be engaged cooperatively by any number of shooters: a JSF, F/A-18 E/F Super Hornet tactical fighter, or future unmanned vehicles, all available to the strike group over vast distances." - Majumdar & LaGrone, 2014

Aircraft from the carrier air wing, such as the F-35C and E-2D, would work in conjunction with Aegis equipped assets to cue SM-6 surface to air missiles (SAM) and SM-3 anti-ballistic missiles (ABM) beyond the range of ship mounted radars (LaGrone & Laird, 2014). Furthermore, the USN would closely coordinate with USAF assets in contested A2/AD environments resulting in new tactics such as F-22s providing targeting data to tomahawk cruise missile equipped nuclear attack submarines. In summary, American fighter aircraft train and fight with other assets. Thus, any examination of future American air-to-air capabilities must account for how American fighter aircraft would preform within not only a broader inter-service force but as part of a broader joint USAF and USN force. 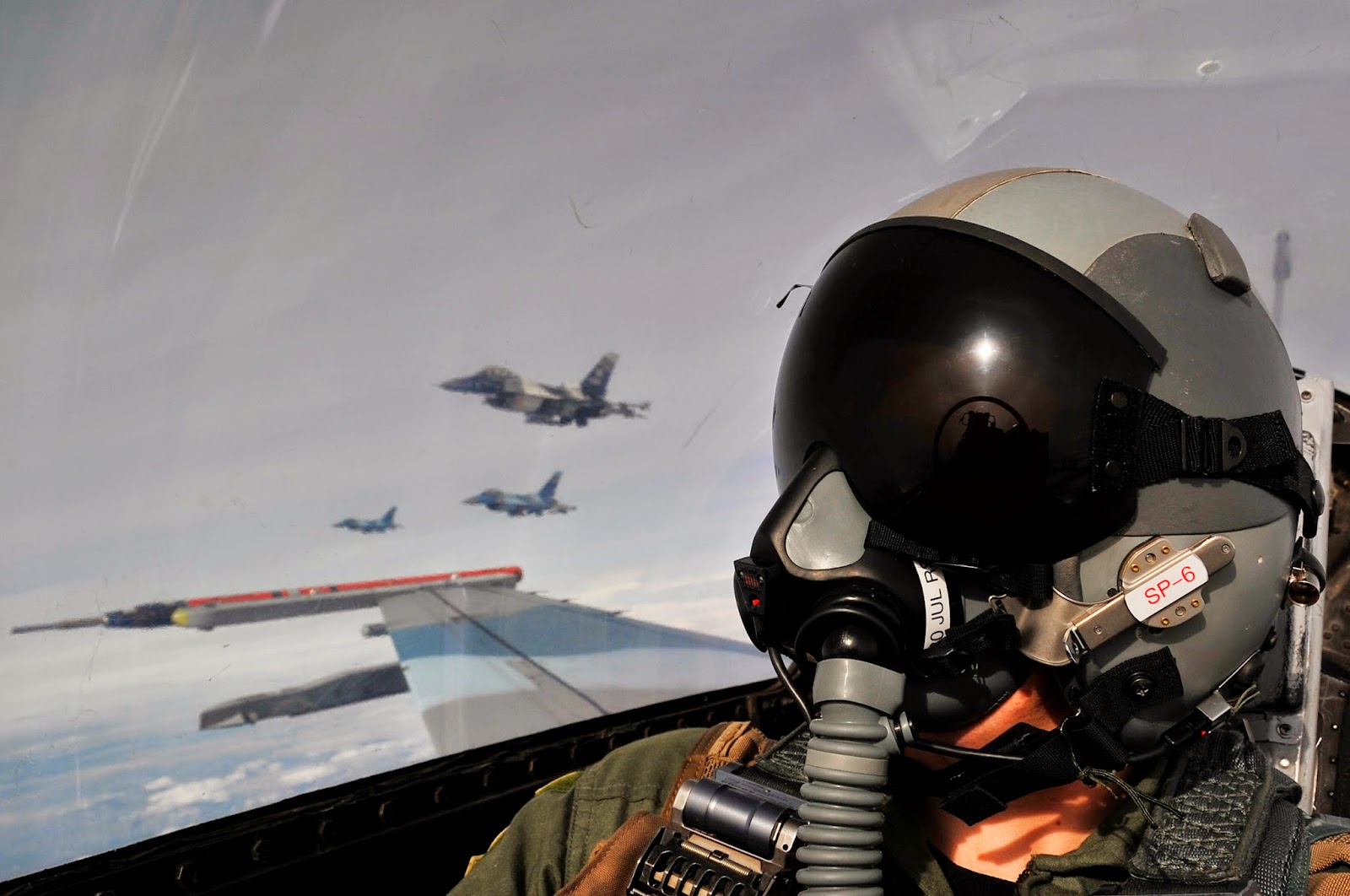 Similarly, without understanding how American fighter pilots train for combat at the tactical level (doctrines and broader operational concepts being strategic level), one cannot determine the probable outcome of an engagement. As The Russian Approach and the American Approach - Part I demonstrate, the manner in which air forces employ similar assets varies significantly. For example, the Russian method of fighter employment favors a comparatively minimal pilot training programs supplemented by mass production of 4.5 generation aircraft and cost-effective use of beyond visual range radar guided missiles. The American approach invests greater resources in both the airframe and the development of its individual fighter pilots. American fighter pilots fly between 250-300 hours per year for training purposes while Russian fighter pilots receive 100 practice hours each year (Source 1 & 2). The base requirements of American fighter pilots are augmented by realistic combat exercises such as Red Flag and Red Air.

Analysis of the air war in Vietnam led by Moody Suter concluded that the majority of pilot casualties occurred before each pilot's tenth combat mission, casualty rates decreased dramatically if a pilot survived their first ten combat missions. Red Flag was devised as a means to provide US fighter pilots with their first ten combat missions in a training environment. More than 30 years later, Red Flag and Red Air provide American fighter pilots with invaluable opportunities to hone their skills and operate alongside US allies in conjunction with a larger networked force. Aggressor units provide a holistic simulation of potential enemy threats not only in air-to-air operations but also in cyber warfare and electronic warfare operations:

"...the Information Aggressors simulate attacks on Blue Force computer networks and information systems. At the same time the 57th and 177th Information Aggressor Squadrons (57th and 177th IAS) might attempt to infiltrate Blue Force bases- including their dorms- to search for intelligence useful to the Aggressors during the simulated war. Combined with the aerial Aggressors flying the F-15 Eagle and F-16 Fighting Falcon fighters, these Aggressor forces mount a coordinated offensive against the Blue Force during exercises...
Similarly, in order to replicate the very real danger of computer network infiltration attacks the 57th and 177th Information Aggressor Squadrons stage elaborate attacks on various USAF installations in order to test their defenses...Toth said that due to the serious nature of the threat, the simulated attacks have to be very realistic. The bases that are subject to a simulated network attack by the Aggressors are not given any prior warning, Toth stated. He added that only a few seniors officer are given prior notice of these 'stimulation exercises' in order to ensure that the Aggressors tactics are not mistaken for an actual attack on the USAF network." - . Dave Majumdar 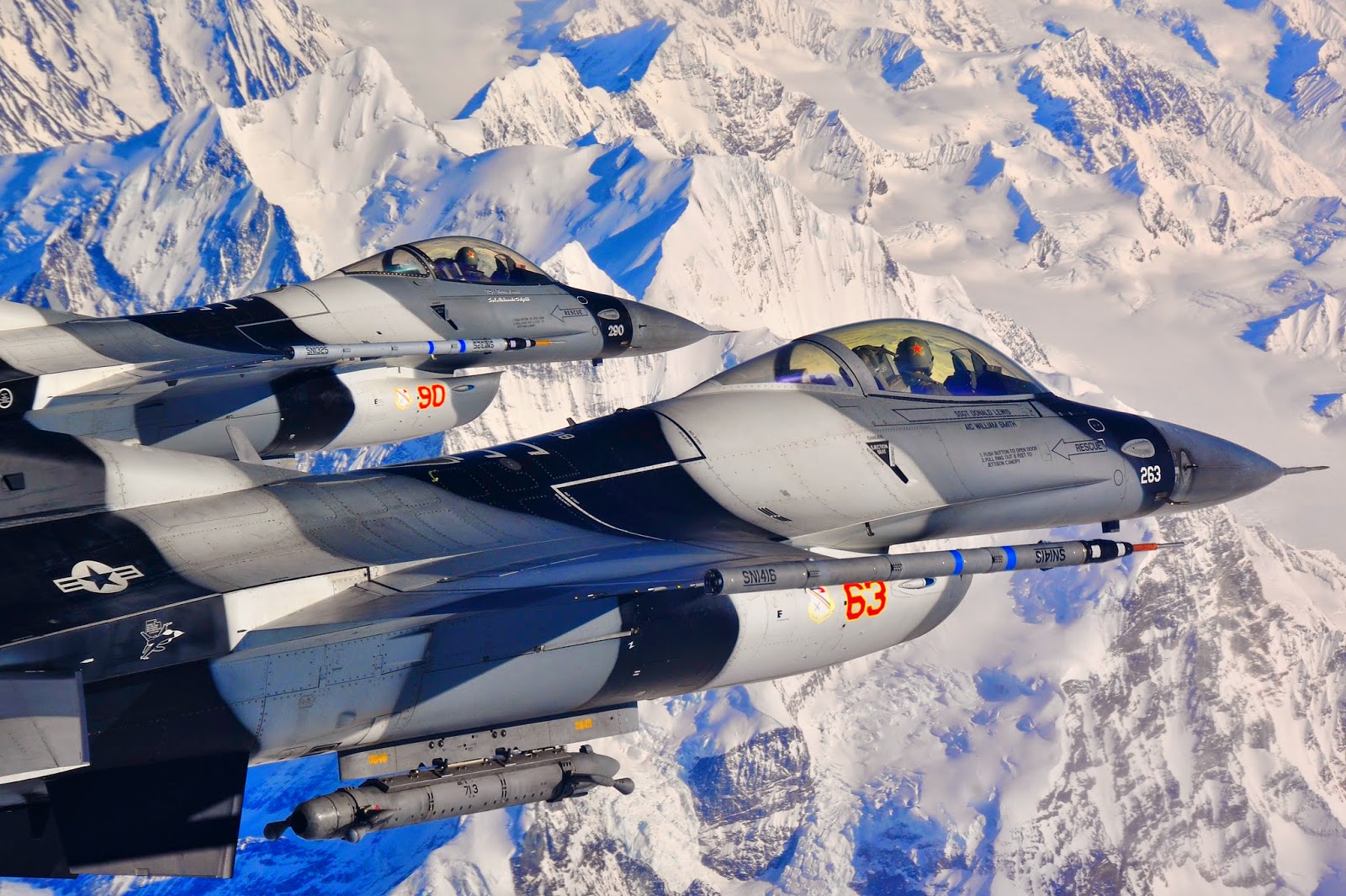 Author's Note: Part III will discuss the process in which TES units and the USAF Weapons School create new TTP which exploits the advantages of stealth and situational awareness. Probable tactics that will be utilized by future American fighter pilots, specifically F-35 pilots, will subsequently be examined. Part IV will discuss the American approach with an A2/AD context in the Western Pacific and the new challenges posed by emerging Chinese systems such as the J-20 and J-31.