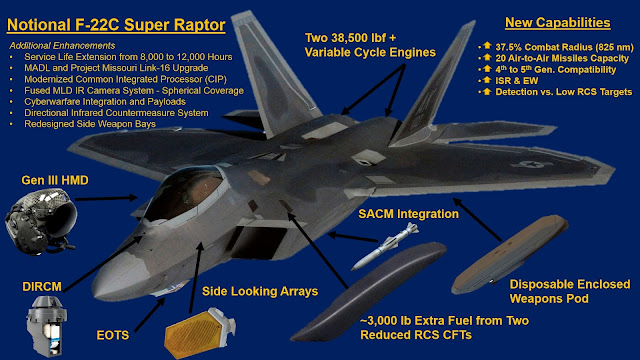 While the enhancements described in Part II will rectify some the inherent design deficiencies of the base F-22A - such as range and limited computing power, additional changes are needed to ensure the F-22 can operate in the most contested environments in the post-2030 timeframe. The key elements of any F-22C upgrade program would include additional sensors to improve situational awareness, survivability, and munitions integration and storage capacity. Overall, the majority of these upgrades will assist in within visual range engagements and survivability against infrared (IR) guided missiles. Each upgrade recommendation varies in technical complexity, schedule, and cost which invariably will make certain upgrades more attractive to the USAF than others. 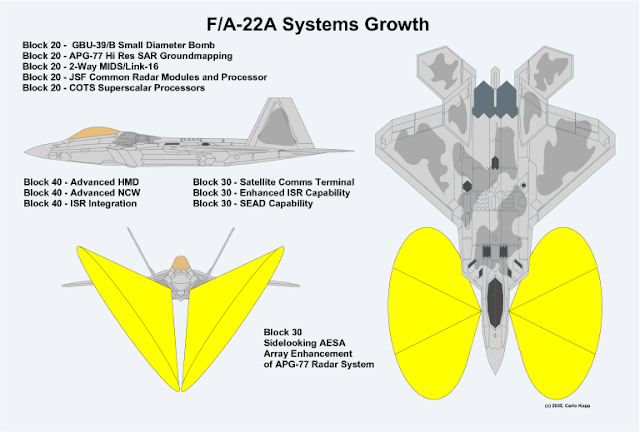 The existing F-22 sensor suite is arguably the most capable of any fighter aircraft with the exception to the F-35. The APG-77 active electronically scanned array (AESA) radar consists of at least 2,000 transmit receive modules which can detect a 1m^2 rcs target at a distance of 150 nautical miles (nm) all the while changing its frequency 1,000 times per second under its low probability of intercept (LPI) mode to evade emission locator systems.[1] The passive detection capabilities of the F-22 are arguably even more impressive, BAE’s ALR-94 radar warning receiver (RWR) and digital electronic warfare suite enables the F-22 to perform precise geolocation and tracking of emitters from any direction up to 250 nm away; the details of this capability are highly classified but it is plausible the fidelity of the geolocation capabilities are of a high enough quality to provide target quality tracks for weapons employment i.e. narrowband interleaved search and track (NBLST) mode.[2] However, the key to leveraging all of the F-22’s powerful sensors – and arguably the area of greatest difficulty to developing a fifth generation fighter, is the F-22’s software which fuses sensor inputs and disseminates critical information for the pilot thereby providing unmatched situational awareness of his or her environment. Despite the already impressive capabilities of the baseline F-22A, changes to the threat environment and USAF procurements since termination of the production line necessitate additional upgrades to the F-22’s sensor suite.
With its current suite of sensors and enhanced situational awareness, Raptor pilots over the skies of Syria haven taken on battle management duties; the superior understanding of the battlespace by Raptor pilots provides nascent airborne warning and control (AWACS) capabilities to Coalition forces.[3] The Raptor’s command and control (C2) role will only grow in importance should the U.S. fight in a highly contested environment where the safety of E-3 and E-2D AWACS aircraft – even at stand-off ranges, is not assured. Furthermore, the limited production run of F-22 and the vast geographic expanse of likely conflict zones both the Asia-Pacific and Europe will force a standard four ship formation of F-22’s to undertake much more demanding combat air patrols for both offensive and defensive counter air missions. A potential solution to expand both the F-22’s C2 capabilities and enable small units of F-22s to cover wider areas of responsibility would be the installation of sidelooking AESA radars which would provide much greater horizontal and vertical coverage. Furthermore, these arrays could utilize a lower frequency band, such as the L-band sidelooking arrays utilized on the Su-35, to improve detection capabilities against low radar cross section targets optimized for the X and S-band.[4] 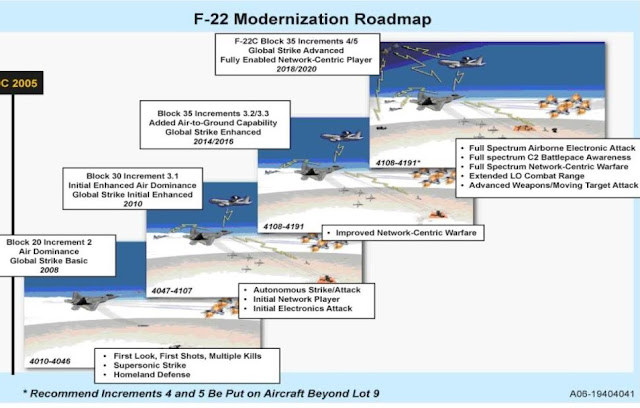 Image 3: 2008 PO document courtesy BDF and F-16.net. Note: this document is out of date, but it does provide valuable insight towards a much longer term upgrade roadmap than the current Increment series. The desire for additional C2 and ISR capabilities is particularly noteworthy.

The F-22A’s existing superstructure has provisions for sidelooking phased array radars as a growth option for further development.[5] The upgrade would not be necessary for every F-22, even upgrading only the flight lead’s and element lead’s aircraft within a four aircraft formation would enable much greater operational flexibility. For example, during the Persian Gulf war, it was standard practice for two pairs of F-15Cs to fly in the beyond visual range fighting formation known as the “Wall of Eagles”:
Using their radars, all formation members searched the area ahead of them usually in a 120 degree azimuth sweep, which covered an 80 nm wide arc at 40 miles off the nose. With as much as five miles between the wingmen, at 40 nm the entire formation searched an 85-mile-wide swath, making it difficult for an adversary to outflank the formation, or escape detection…Each two-ship element in the ‘Wall of Eagles’ formation searched with their radars from the earth’s surface to the base of the contrail level, the two elements ensuring overlapping coverage. Additionally, the wingman visually scanned the contrail layer for telltale signs of aircraft approach in that altitude band. – F-15C Eagle vs Mig-23/25, Douglas C. Dildy and Tom Cooper, pp. 43, 2016.
This formation maximized the probability of detecting adversary aircraft across the assigned mission area of combat air patrols. The potential coverage of two pairs of F-22s employing a similar tactic would dwarf the original, but the effectiveness of the tactic would be augmented considerably if at least two aircraft per formation were equipped with sidelooking arrays providing vertical and substantial additional horizontal coverage.
In the low observable “AWACS” role, side panel equipped Raptors could provide a highly survivable situational awareness capability for the joint force even within contested airspace. As of fiscal year 2017 USAF budget documents, 72 F-22As will receive Link 16 capabilities in an unspecified waveform and all F-22s will receive IFTL Gateway mode which will enable 5th to 4th generation communications. Even after expending all internal weapons, F-22s will likely remain close to the battlefield provided fuel is not a constraint given their unique highly survivable battle management and command and control capabilities:
After their missiles were fired, the F-22’s active & passive sensor capabilities functioned as the Raptor’s last weapon. Northern Edge 2006’s Raptors remained in the fight, flying as stealthy forward air controllers and guiding their colleagues to enemies sitting behind mountains and other ‘Blue Force’ AWACS blind spots. When the AIM-120D AMRAAM missile enters wider service, F-22s will also have the option of actively guiding missiles fired by other aircraft.[6]
Overall assessment (1 – low, 5 – High):
Relative Utility: 3/5 – Intermediate
Technical Feasibility and Cost: 3/5 – Intermediate

Recommendation: Further technical and cost analysis required utilizing classified information is likely required to make a full assessment. The U.S. has yet to field a fighters equipped with sidelooking arrays as of 2016. All existing USAF aircraft employing sidelooking arrays are optimized at observation of ground targets such as JSTARS and Global Hawk.[7] Any contract would likely be a sole source to Northrop Grumman since the system would have to be integrated with the existing APG-77(V)1. Air Power Australia is among the few sources in the public domain which states the base airframe has provisions for sidelooking arrays, internal modifications since the initial design may have utilized any existing growth margin. Furthermore, the full capabilities of the APG-77(V)1 may be sufficient to provide acceptable C2 capabilities without further investments. Determining the extent to which additional capabilities are needed to monitor contested airspace likely merits its own in-depth technical study.

Incorporating a different frequency band in the sidelooking arrays has the potential to provide greater flexibility against intensive adversary jamming against the X-band. However, the APG-77(V)1 is already highly resistant to jamming. Furthermore, L-band arrays may not be able to provide similar target quality track information required for weapons employment. 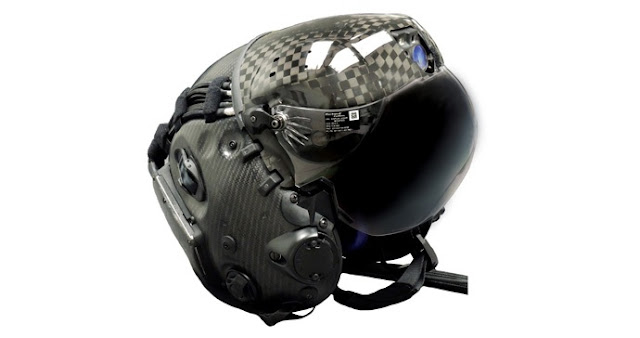 Arguably the most glaring current deficiency of the F-22A is its lack of a helmet mounted display and cueing system (HMDCS). HMDs are vital for within visual range engagements as they enable the cueing of advanced off-boresight missiles such as the AIM-9X Block I; off-boresight missiles paired with an HMD enable the pilot to look at an adversary aircraft and gain IR missile lock on the target up to 90 degrees from the launch point. Interception of the target even at extreme angles is possible for modern IR guided missiles as a result of thrust vectoring and freedom from biological g-limit constraints which dictate the maneuverability envelope pilots can sustain. Without an HMD, Raptor pilots have had to rely upon their traditional heads up display (HUD) for IR missile cueing and display of weapons engagement zones (WEZ) which constraints IR targeting to the forward sector. At the operational level, the lack of an HMD can be mitigated somewhat with the lock-on-after-launch (LOAL) feature in the AIM-9X Block II as the missile will loiter in close proximity to the launch point before being re-tasked by the pilot to perform any aspect interception. However, the LOAL feature requires integration of a two-way datalink which will not be completed until the Increment 3.2b upgrades are completed. The USAF has tested the Thales Scorpion HMDCS for integration with the F-22 in 2014, but the effort was canceled as a result of sequestration.[8] FY 2017 USAF budget documents indicate the USAF still plans to field a HMDCS system for the F-22 in the near future:
The HMDCS program will select, integrate, test and field a mature HMDCS to take full advantage of advanced weapons such as the AIM-9X, and improved battlespace situational awareness during day/night within-visual-range engagements. The HMDCS will be integrated on all Block 30/35 Raptors.[9]
While the integration of either the Joint Helmet Mounted Cueing System (JHMCS) or the Scorpion HMDCS on the F-22 is likely, there are no official plans to develop and integrate an equivalent to the Rockwell Collins third generation HMD for the F-22. The main advantage of the F-35’s HMD over JHMCS or the Scorpion is its integration with the distributed aperture system – a series of cameras embedded in the F-35’s skin which provides real-time all-aspect tracking of aircraft within a 15 nautical mile radius.[10] However, the F-22 does not require an equivalent of the third generation HMD as it has no equivalent of DAS. Furthermore, the single piece bubble canopy of the F-22 already affords the pilot with excellent visibility when compared to the F-35’s cockpit without DAS. An equivalent to the third generation HMD might be merited depending upon a decision to fuse the sensor inputs of the AAR-56 Missile Launch Detector (MLD) cameras into a cohesive system like DAS as well as the integration of the advanced electro-optical targeting system (EOTS) which will be discussed in the next article.